The to and fro continues between father son over the media.

More information has come out regarding the altercation between rocker Tommy Lee and his son Brandon Lee earlier this week, which saw the former get knocked out and taken to hospital with his injuries. Brandon has broken his silence on the issue, while Tommy denies his son's statement about his alcoholism. 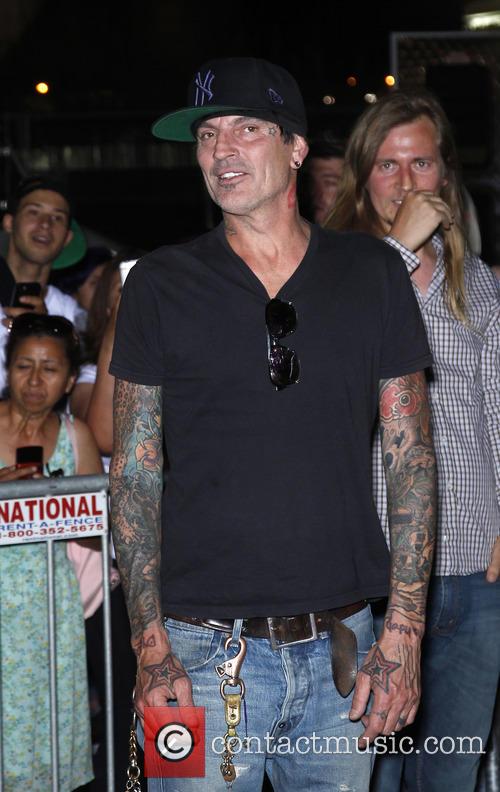 On Monday night (March 5th 2018), 21-year-old Brandon Lee allegedly burst into his father Tommy Lee's bedroom and assaulted him in front of his fiancee Brittany Furlan. Early reports said that Brandon claimed it was 'self-defense', but both Brittany and Tommy have denied that claim.

Brandon had apparently been living with the Motley Crue rocker at his Calabasas home, but he turned violent after an argument regarding Brandon's mother Pamela Anderson. It seems Brandon had taken issue with a series of social media posts that Tommy had posted degrading his ex-wife. Now, Brandon has suggested the argument was due to Tommy's alcoholism.

'I'm devastated at the events of the last several days that have been a result of my father's alcoholism', Brandon told People. 'I've worked tirelessly organizing an intervention and it's incredibly upsetting that it never came to fruition. I wanted my dad's hopeful sobriety and recovery to be a private family matter but, as a result of his accusations on social media, I feel forced to speak out. I have and will continue to cooperate with law enforcement as needed. I love my father and just want to see him sober, happy and healthy.'

'I'm happier than I've been in my entire life', Tommy responded on Twitter. 'I have a few drinks here and there because I'm f***ing retired and enjoying my life. I worked 30+ f***ing years, I deserve it. You didn't arrange any intervention, you barely spoke to me while you were here. Just covering your ass!'

Brittany Furlan's 911 call suggested that the altercation had been sudden and one-sided. 'My stepson and my fiancé got into a fight and [Brandon] pushed his father. Then he asked his son to leave and he wouldn't leave and he punched [Tommy]', she said in the call, obtained by The Blast.

'My stepson has guns in his room and that's why I'm freaked out; I just locked the door', she continued. '[Brandon] punched him really hard, he punched him in the face and he went flying backwards. He's totally out. Like a light.'

'He didn't hit his son, his son pushed him. He asked him to leave and was like, 'Here's the door' and put his arm on his son's shoulder. His son punched him in the face and knocked him out cold. He's bleeding.'

More: Tommy Lee accuses his son of knocking him out

She says the argument occurred because Tommy 'got mad' over something Pamela Anderson said in a recent interview on 'Piers Morgan's Life Stories' and he 'posted some ugly photos of her' in retaliation. Brittany was still on the phone to paramedics when Tommy came round, and he had requested that they cancel the call-out despite his injuries.