Rocker Tommy Lee Pulled Out Of A Concert In New York On Wednesday (14oct15) Due To Tendinitis. 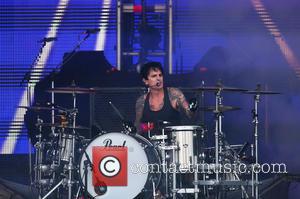 The Motley Crue drummer was scheduled to hit the stage in Buffalo for the band's Final Tour show, but shortly before the concert he took to Twitter.com to inform fans he had woken up with a pain in his wrist and had been advised by a doctor to skip the show to give himself time to recover.

Lee did make an appearance on stage during the show, but only to apologise to fans.

Glen Sobel, Alice Cooper's drummer, stepped in to replace Lee during the show.

"So today... I got a call from Motley Crüe management about me filling in for Tommy Lee who has a hurt wrist," a message on Facebook.com reads. "After our Alice Cooper set, I rocked a set w/ (with) Crue here in Buffalo, NY. It's been an insane day of prep & making cheat sheets. I can't describe what an honor its been to rock tonight with Vince, Mick, Nikki & Tommy who was handling some of the electronics and cueing me through the in ear monitors from side stage...

"It's one of those things - had I known when I was a kid this would happen one day - you get the picture. Here's to hoping Tommy Lee's wrist heals up quickly. I'm familiar with the experience of playing through pain while being on tour. It isn't fun. Thx (Thanks) to all my Alice band mates & crew members... for making this day run smooth, and of course Alice for having me out on this amazing tour. See you at the next show!"

Lee is hoping to return to the stage on Friday (16Oct15) in Bridgeport, Connecticut.