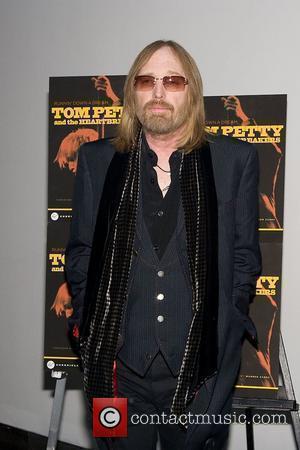 Tom Petty staged a semi-reunion of supergroup THE TRAVELING WILBURYS onstage at the Hollywood Bowl in Los Angeles last night (26SEP06) when he invited British rocker Jeff Lynne to join him. The LEARNING TO FLY singer was midway through his two-hour set with backing group THE HEARTBREAKERS when he took time out to pay tribute to the star-studded group he and Lynne formed with Roy Orbison, George Harrison and Bob Dylan. ELECTRIC LIGHT ORCHESTRA star Lynne joined Petty and the band for a rendition of The Traveling Wilburys' HANDLE WITH CARE hit. He wasn't the only star to take to the sold-out Hollywood Bowl stage with Petty and The Heartbreakers - Fleetwood Mac star Stevie Nicks was introduced as "the only honourary Heartbreaker," and joined the group for hits STOP DRAGGING MY HEART AROUND, I NEED TO KNOW and INSIDER, before stepping to the side of the stage to provide backing vocals for the rest of the show. The show comes towards the end of what is being touted at Petty's last full tour and with just five concerts left, the rocker was visibly moved as his return to the Hollywood Bowl closed. He finished the show with a rousing encore of AMERICAN GIRL and after soaking up a standing ovation, he told fans, "God bless you. Thank you."