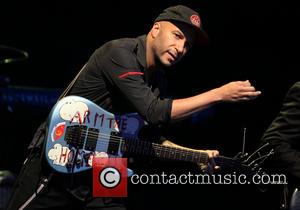 Rocker Tom Morello has joined Bruce Springsteen in the studio to record new material for a follow-up to The Boss' 2012 album Wrecking Ball.

The Rage Against the MAChine frontman was recruited to join Springsteen's backing group The E Street Band on his Australian tour in March (13) as a stand-in for Steven Van Zandt, who sat out the trek to film his cult Tv show Lilyhammer.

Springsteen insists performing with Morell was "exciting" and reveals they even spent one of their days off Down Under collaborating in a studio in Sydney.

He tells Rolling Stone magazine, "We've never had a recording session during a tour in our lives. We did a couple of things that I wanted to put down. So that was very exciting. And being with Tommy was exciting. The band... continues to be a source of inspiration for me."

Springsteen also reveals he is pleased with what he has come up with so far for his next album, adding, "I have stuff I'm working on that I'm very happy about. I hate to say, because I don't like to be wrong, but I have a lot of material. I still feel like I'm in the middle of the well."