Tom Hiddleston Rose To The Challenge Of I Saw The Light

Tom Hiddleston seems to be everywhere at the moment.

His hit TV series The Night Manager is just coming to its conclusion in Britain (it airs in America in April), his satirical thriller High-Rise just opened in the UK, and now his Hank Williams biopic I Saw the Light is out in the US. 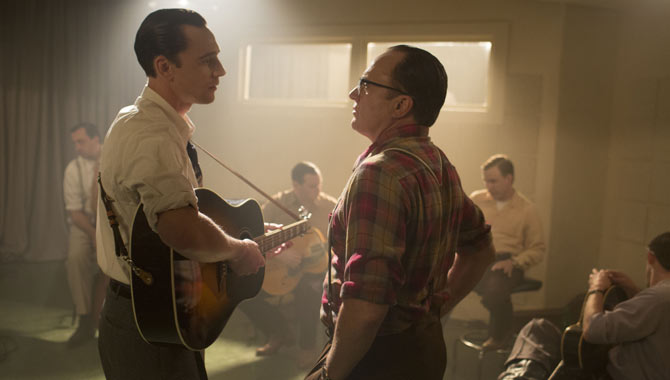 I Saw the Light traces Williams from his first marriage to Audrey Mae Sheppard (Elizabeth Olsen) in 1944 to his untimely death in 1953 at just 29 years old. "In the intervening period, he wrote some of the greatest songs in the history of American music," Hiddleston says. "The film is about the man behind the myth, the power of his music, the sheer voltage of his talent and charisma, and his formidable demons."

Of course, one of the main issues was Williams' addiction to drug and alcohol. "Those were his ways of escaping the predicament of his sadness," Hiddleston says. "I think to some degree Hank was unknowable, even to those closest to him. He worked hard, played hard, lived hard. There were women, there was whiskey. But when he sang about being in the doghouse in Move it on Over, or about his heartbreak in I'm So Lonesome I Could Cry, it came from an honest place."

Hiddleston found it a challenge to play such a complicated figure. "Hank's life has a tragic arc," he says, "but in simple truth, he was a genius: a star that burned twice as bright and lived half as long. It's a huge role for me and a huge responsibility."

And he knew that he would have to sing the songs himself ("I became aware very quickly that there would be no faking it"), so he worked with the acclaimed singer-songwriter Rodney Crowell to immerse himself in the Nashville sound. For five weeks, they recorded Williams' songs. "I remember doing Cold, Cold Heart many times for Rodney and him asking me to go again," Hiddleston says. "He would say, 'The song sounds beautiful, but I can't hear the pain.' So we kept working."

Hiddleston was understandably nervous when the film began screening for audiences, especially those containing people who knew Hank Williams personally. But in the end, his intense preparation paid off. When Williams' musician granddaughter Holly saw the film, she wrote to Hiddleston, calling his performance "haunting". "After that, nothing else matters," Hiddleston says. "If she thinks we did right by him, then we did okay."

Watch the trailer for I Saw The Light: