Tom Hardy admits the mask he has to wear on 'The Dark Knight Rises' is so restrictive he cannot hear any of his fellow actors. 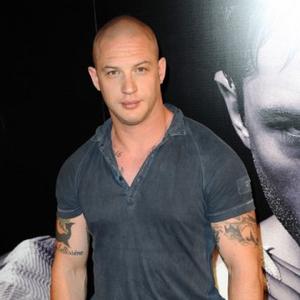 Tom Hardy "can't hear a f**king" thing on the set of 'The Dark Knight Rises'.

The 'Inception' actor is portraying villainous Bane in the forthcoming Christopher Nolan-directed Batman movie, and the facial mask he must wear has restricted his hearing, leading to Christian Bale - who plays the Caped Crusader - having to tip him off when he needs to say a line.

He said: "Any time you put something on your face, you're going to adopt a personality and a physicality that has nothing to do with acting.

"It allows a performance to be free. The only downside is you can't hear a f**king word anyone is saying. Batman can't hear me and he can't see me speaking so we sort of stand there looking at each other for a while. We've been doing hand signals! I put my thumbs up when I finish my lines or I wink. And he sort of wiggles his fingers out of shot and I go, 'OK, now I've got to run up and kick you in the b******s!' "

However, the 33-year-old hunk admits it was not a difficult decision for him to play the bad guy, and instantly said yes when he was asked by Christopher.

He told Total Film magazine: "I remember saying, 'Hang on a minute, you're asking me to come around the world with you, playing a villain in a Batman movie, and the only downside is I have to wear a mask? Hmm. Let me think. I'll get back to you. No! I'm f**king there man! Anything you need.' "

'The Dark Knight Rises' - which also stars Sir Michael Caine and Anne Hathaway - is due for release in 2012.