He teams up with Ridley Scott for this period series.

Tom Hardy returns to the small screen in the thrilling period drama 'Taboo' co-produced by Ridley Scott. He'll be playing another hard-man role in the eight-part series that is set to arrive on FX soon, and the first trailer has just been released. 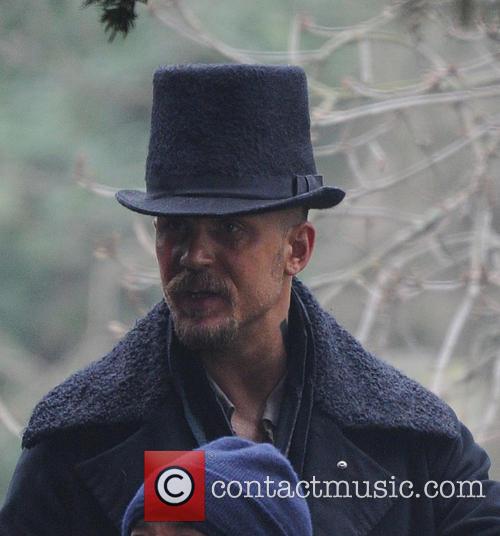 Tom Hardy on the set of his new series 'Taboo'

He's currently up for an Oscar for Best Actor in a Supporting Role after his appearance in Alejandro González Iñárritu's 'The Revenant', but now he's coming back to entertain us on television with this FX and BBC One collaborative series. 'Taboo' has been inspired by an original idea from Hardy himself, as well as his father Chips Hardy who is also a consulting producer on the show. Co-produced by Ridley Scott and Steven Knight in Hardy and Knight's third union after 2013's 'Locke' and TV drama 'Peaky Blinders', the series has been directed by Kristoffer Nyholm of 'The Enfield Haunting' and 'The Killing'.

Hardy plays James Keziah Delaney, the long-lost heir to his deceased father's collapsing shipping business. He's long been thought dead, but returns for his father's funeral in 1814 after a long stay in Africa where he changed almost beyond recognition. He's fully prepared to take on the family empire, but that means inheriting some very unpleasant enemies along the way. No matter though, Delaney is anything but afraid of his adversaries. He knows the East India Company are after his life, but he knows the world of dodgy dealings better than anyone thought and it seems no-one is going to survive a run-in with him.

So far, there is no sign of a premiere date for the series but it is expected to arrive in 2017 as production continues in London.