Scroll down for some on-set pics of Tom Hardy 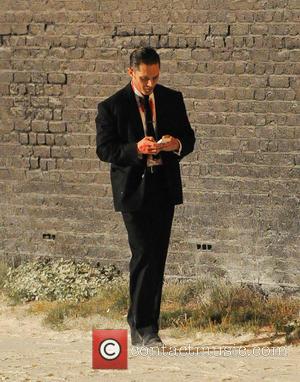 A haggard looking Tom Hardy has been pictured filming scenes for his upcoming movie, Legend, in which he plays both Kray twins, Reggie and Ronnie.

Pictured wearing a black suit with his white shirt covered in blood, not to mention his battered and bloodied knuckles, it seems as though whichever twin he was representing had been throwing his weight around. What followed, if Hardy’s lonesome walk by the canal tells us anything, is a somber scene. Until he pulls out his mobile phone and brings us right back to 2014...

Announcing his part in “Legend”, Hardy explained that he had to “work out how to play both twins, which will be fun. It's another experiment and I'm really looking forward to it.” He added: “I’m not going to put too much pressure on myself, I just want to have some fun. The more of a challenge I give myself, the easier it is to take on more projects which are complicated in the future.”

Legend generated a buzz at Cannes, with potential buyers claiming Brian Hegleland's screenplay was 'one of the best scripts' they'd come across.The hotly-anticipated biopic is expected to hit cinemas in 2015. Martin and Gary Kemp have already portrayed the notorious twins in the 1990 movie, 'The Krays'.