'It'd Be Good To Do It Again': Tom Hardy Wasn't Put Off By The Challenges Of 'Legend'

It was one of the actor's most challenging roles yet - and that's saying something.

It's a filmmaking technique notoriously difficult to pull off, but Tom Hardy has nothing but fond recollections from facing the gruelling process of playing both the Kray twins in Brian Helgeland's explorative crime biopic 'Legend', even though he hadn't planned on landing both leads at the start. 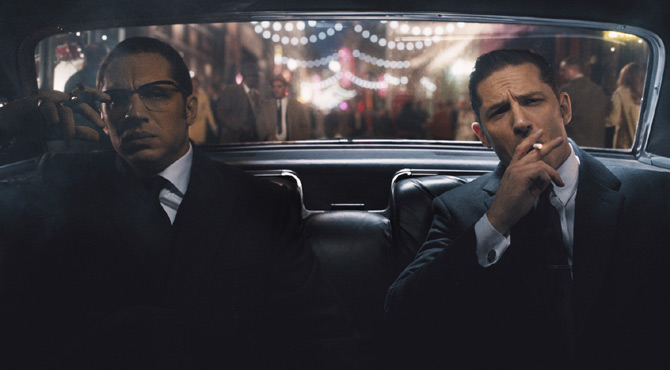 Hardy admits that he only had eyes for the openly bisexual Ronnie Kray when he first read the script, confessing that he felt there was a lot more 'freedom' to playing that role. 'In hindsight, I had to be a bit more careful with Ron because there was a way of lambasting or being cartoonish to an extent where you miss the point of the clown effort', he says. 'It's not to joke about things but to create a certain level of humour whereby people laugh along and then don't realise that what they're laughing at is not something that's funny at all, it's incredibly serious.'

More: Tom Hardy shuts down reporter's question about his sexuality

Predictably, he found the more straight-laced Reggie more tricky because he was a lot more layered as a person and Hardy's previous feelings about him didn't quite match the movie version. 'Reggie was harder to play because he navigates terrain with a veneer which hides his interior landscape', he reveals, with beautiful articulation.

And reflecting the very different personalities of two very close people wasn't the only challenge he faced; indeed, he even had to get stuck into the technical side of shooting the movie in order to understand and properly execute scenes featuring the two brothers - i.e. just him, with a little help from a body double. 'It became really good fun when we committed to doing it', he insists, revealing that having both parts to play actually helped in some ways because he knew how to respond. 'It'd be good to do it again now, knowing what we know and what's possible.'

As positive as he remains about acting in such a technically complicated movie, even he has to admit that the fight scene between the brothers took a lot of focus. 'It was so full-on, everyone was putting in their input in how to make this illusion work and there was so many opportunities there to fall apart and see behind the curtain of it being the same person etc.'

More: Read our review of 'Legend'

'Legend' is in UK cinemas now.

Watch the trailer for 'Legend' here: