Tom Hardy and Emily Browning On Set For 'Legend' [Pictures]

Check out on-set pictures of "Legend" below 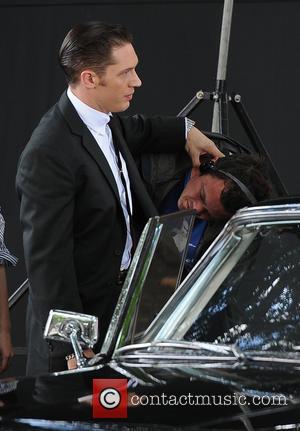 Tom Hardy and Emily Browning were hard at work in the torrential London Rain this week filming “Legend”  - the story of the identical Kray Twins, two gangsters who terrorized London in the 1950s and 1960s, with Hardy playing both Reginald and Ronald.

The pair, complete with vintage garb, traversed the East London street while filming the ambitious crime drama. Some scenes involved a vintage black Ford, which Tom can be seen driving while onlookers peer beyond orange barriers.

This is just one of an array of exciting projects for Hardy, who, having already stunned the critics with a flawless display in ‘Locke’, has a role as Elton John lined up in an upcoming biopic.

Announcing his part in “Legend”, Hardy explained that he had to “work out how to play both twins, which will be fun. It's another experiment and I'm really looking forward to it.” He added: “I’m not going to put too much pressure on myself, I just want to have some fun. The more of a challenge I give myself, the easier it is to take on more projects which are complicated in the future.”

This isn’t the first time The Kray Twins have been brough to the big screen; Martin and Gary Kemp played notorious siblings in the 1990 movie of their criminal exploits called ‘The Krays’.