The actor credits his stunt double with a lot of the work on 'Legend'.

The Kray twins are part of London lore, iconic gangsters who ran the city in the swinging 1960s. They've been portrayed on-screen before (by the Kemp brothers in the 1990 drama The Krays), and Oscar-winning writer turned director Brian Helgeland opted to cast Tom Hardy in both roles for his new film Legend. 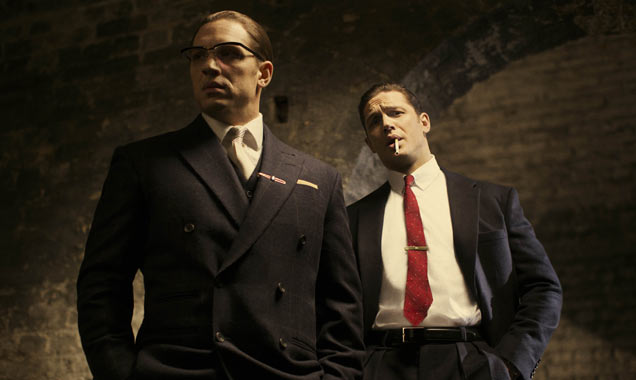 Word has it that Helgeland wanted Hardy to play Reggie in the film, but when he read the script Hardy was drawn to the more colourful Ronnie. "There was a moment when I could have come away just playing Reggie," Hardy says of his first meeting with Helgeland. "We could have gone and found a superlative character actor to play Ronnie, and that would have been the best of everything. But I was like, 'Well, I feel Ronnie!' So which actor am I gonna give up Ronnie to if I play Reggie? I can't have that. Because that's all the fun there, and Reggie's so straight." By the end of their meeting, Helgeland said, "I'll give you Ron if you give me Reg."

Watch the trailer for 'Legend' here:

It took about an hour in make-up for Hardy to transform himself from one character to the other. "Ron is predictably unpredictable," he says. "So just for a performer it's fun to play because you have everything on the smorgasbord you can use. You have multiple options and you can pull the rug on anyone you want at any given time. I was drawn initially because there's a bit of a disco ball head to Ronnie. There's some options there. With Reg I know he's going that way even if I might want to take him another way."

More: Read our review of 'Legend'

Playing both roles was "the hardest thing that I've ever done, technically," Hardy admits. To accomplish this without expensive digital effects, Helgeland used split screens and had Hardy play off his Mad Max stunt double, New Zealander Jacob Tomuri. "He inherited the hardest job of my career," Hardy says. "Jacob played both brothers too, had to learn all of the lines. But he superseded that, and was eventually ad-libbing. There's a line that ended up in the film, where Ronnie goes, 'I bent him up like a pretzel, I hurt him really f***ing badly.' Where did that come from? It came from New Zealand."