Tom Hanks Found Another Everyman In A Hologram For The King

In his long and varied career, Tom Hanks has specialised in playing either actual historical figures or people who feel almost painfully real.

His new film A Hologram for the King feels like a true story, but is actually based on the Dave Eggers novel. In the movie, which he also produced, Hanks plays Alan Clay, a 54-year-old who, as Eggers describes in the book, "could not find work, could not sign clients. He had moved from Schwinn to Huffy to Frontier Manufacturing Partners to Alan Clay Consulting to sitting at home watching DVDs of the Red Sox winning the Series in '04 and '07." In the story, Alan travels to Saudi Arabia to convince King Abdullah to sign an IT contract. 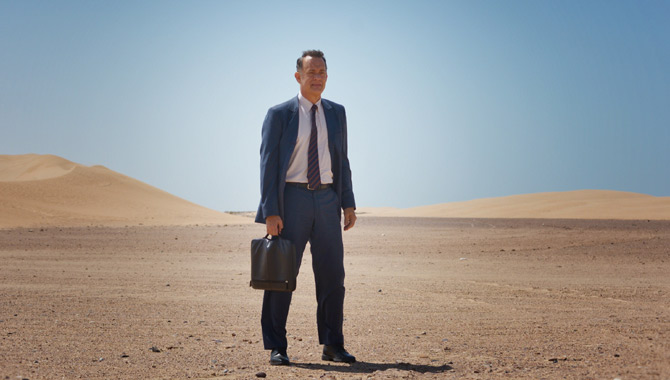 "It's about the art of the deal," Hanks says. "Dave Eggers writes stories that are surreal and subversive because they're about people in circumstances where you can't predict what's happening next."

Convincing the author to sell the movie rights was Hanks' biggest challenge. "Dave Eggers does not need movies to be made out of his books," he says with an ironic laugh. "He had the most fabulous memoir on the planet, A Heartbreaking Work of Staggering Genius, and I knew personally screenwriters who were saying, 'I know how to make that into a movie!' I told every one of them, 'That book should never be turned into a movie, because it would lose that Dave Eggers voice.' So when we met, I said, 'Dave, you're so smart never to just sell your books to movie studios, but you know this one will really work great!'"

Always up for putting a twist on the average American character, Hanks was drawn to playing Alan for obvious reasons. "Alan is that American for whom life has been turned upside on his head," he says. "He used to make the greatest bicycles in the world, and now he has to go to Saudi Arabia to try to sell a three-dimensional holographic business conference thing."

After making the film, Hanks has returned to his obsession with real historical figures. "I read about history for pleasure," he says. "I get into bed and I'm reading some 1400 page tome, and my wife Rita [Wilson] says, 'What's that about?' And I'll say, 'It's about some arcane thing in the 14th century.' And Rita says, 'Will you ever just read a novel?' And I say, 'I've tried, baby, I've tried. But that stuff is just made up!'"

Watch the trailer for A Hologram For The King: