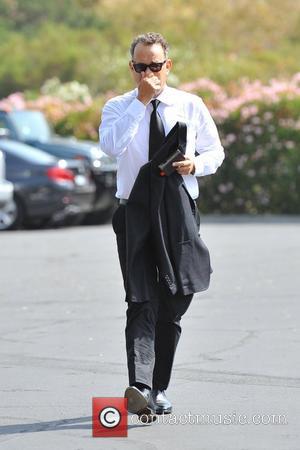 Tom Hanks and Jay Leno led mourners in remembering the late actor Michael Clarke Duncan, yesterday (September 10, 2012). Both Hanks and Leno shared tales of remembrance about the actor. Hanks starred alongside Michael Clarke Duncan in The Green Mile, the movie for which he was best known. He recalled how he would mock Michael for his handwriting, saying that it was "loopy and huge" and that it resembled the handwriting of "a 12 year old girl who loves horses," BBC News report.
The Oscar-winning actor then recounted a tale of Michael's childhood that had been relayed to him and demonstrates why the 6ft 4in man became known as a "gentle giant." Hanks explained how Michael had returned home one day as a child and told his mother that he was going to join a gang. His mother reportedly struck him with a frying pan and he was forced to tell his prospective fellow gang members, somewhat sheepishly, that his mother would not allow him to join their gang. "If it wasn't for that mama and the frying pan with a pork chop, we would not be here today celebrating the life of Michael Clarke Duncan." Leno also recounted fond memories of the actor: "Just to see such a pure heart and pure kindness, and to see it taken so early," he told mourners. "There are no sadder words than what might have been."
Members of the public were able to pay tribute to the actor at a memorial the previous day, at the Hall of Liberty in Forest Lawn, TMZ report. An open viewing of the body was followed by the screening of his memorable performance in The Green Mile.