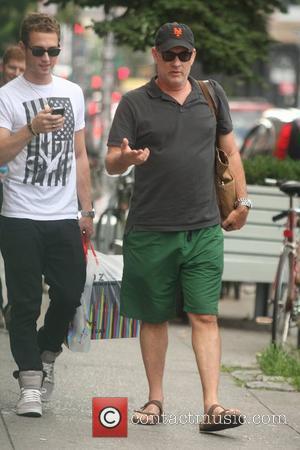 Picture: Actor Tom Hanks seen out and about with his son Chet and daughter Elizabeth Hanks New York City, USA - 27.07.12

'Cloud Atlas' is set to become a major Hollywood blockbuster on its release with its complex storyline and all-star cast.

In a six minute long trailer, this all-encompassing flick inspired by David Mitchell's novel of the same name engages and bewilders viewers with a complicated web of intertwined (in some ways) stories from different time periods with a star-studded group of actors playing several roles each. With a challenging script like that, it's no wonder the writers have roped in Oscar winning superstars Tom Hanks ('Forrest Gump', 'The Da Vinci Code'), Halle Berry ('X-Men', 'Die Another Day'), Jim Broadbent ('Harry Potter and the Half-Blood Prince', 'Moulin Rouge') and Susan Sarandon ('The Rocky Horror Picture Show') as the main stars.

British actor Ben Whishaw also stars in the movie, recently telling Vulture that he will play 'Frobisher in the thirties; a female American in the seventies, in the Luisa Rey section; and a smallish role, where I'm basically an extra, in a modern-day nursing home, in the Timothy Cavendish section.' He explained the concept of the movie to the publication. 'Everyone in the cast is playing at least three parts, some big and some small', he said. 'Everybody's swapping race and gender, so it's very ambitious and quite fun.'