Tom Cruise, 'Star Wars Episode VII' And Everything We Know About That Rumour

Is Tom Cruise about to add a ‘Star Wars’ cameo to his CV?

In the latest round of Star Wars Episode VII rumours, The Sun is reporting that Tom Cruise could be making a cameo appearance in the upcoming instalment. Yes Ethan Hunt’s next mission could be in a galaxy far, far away! Of course it’s all just another Star Wars rumour at the moment (and we’ve had plenty of those in the last few months), but just because it’s Tom, let’s indulge this one and go over everything we know about the possibility of Cruise in Episode VII.

1. Jj Abrams and Tom have a history

Tom and JJ are no strangers to working together. In 2006 JJ Abrams made his directorial debut with Mission Impossible III, starring of course, Tom Cruise. He also served as a writer on the franchise’s third instalment and would go on to produce Mission Impossible Ghost Protocol five years later. Abrams is also said to be producing the fifth Ethan Hunt adventure, due out sometime next year.

More: This Headline Has Tom Cruise and Star Wars In It. So...

2. It’s all going down in London

Episode VII is currently being filmed at London’s Pinewood Studios and guess who’s also in the capital? Tom Cruise! Tom is said to have been in London for the past week and he has actually be photographed out and about in the city.

3. Tom and JJ are said to have have a ‘meeting’

The Sun is reporting that the actor and director met at London’s Belgravia Hotel on Saturday evening along with “some other people from Star Wars.” The newspaper also quotes a source as saying that JJ “loves working with Tom whenever he gets the chance.”

4. Harrison’s injury may have opened up a window in the schedule

Episode VII’s filming schedule has run into problem’s recently after Harrison Ford broke his leg during filming. Harrison’s injury, which required surgery, is expected to keep the actor out of action for at least two months. However an ‘insider’ told The Sun that temporarily loosing Ford has given producers “some time to play around with”, meaning there could be an opportunity for them to film a cameo spot with Cruise. 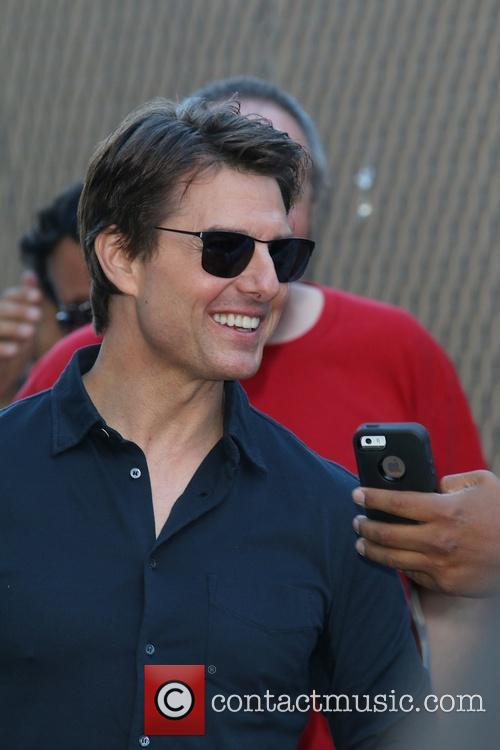 Could the force be with Tom Cruise

5. Cruise has cameoed before

You might think it would be an actual mission impossible for Tom Cruise to only have a small role in any movie, but he’s done it before. In 2008 he made a brief appearance in Ben Stiller comedy Tropic Thunder playing studio executive Les Grossman. He had also previously appeared as himself in Austin Powers in Goldmember back in 2002.