Tom Cruise once again stars as Jack Reacher in the new movie Never Go Back.

After weathering the furore over his casting as Lee Child's 6-foot-5 blond muscle man in the 2012 film Jack Reacher, Tom Cruise set out to make the character his own in the sequel, Jack Reacher: Never Go Back. "I love this character," Cruise says with a smile. "I love the iconic nature of this character. I like the physicality of the character. It's fun creating the kinds of stories that he has as he goes to different places." 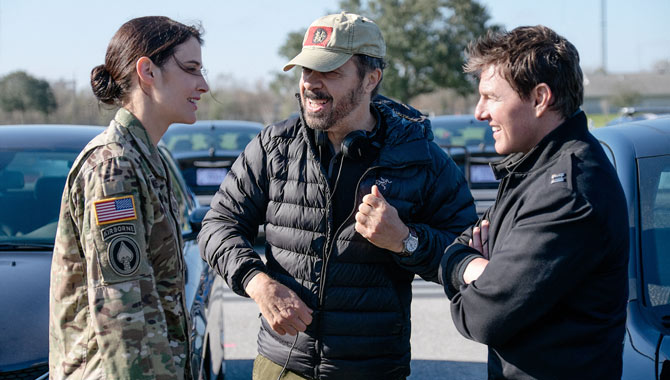 Cruise also liked the way the novels keep the action grounded in reality. "When you read the books you just find yourself thinking that they're really satisfying," he says. "It's like the movies I watched in the '70s, and some from the '60s, the movies that you kind of look back on. Jack is the cool loner - it's very Western, very American. And I love the fact that today, especially in this digital age, he's someone who doesn't have a phone, he's off-grid. He walks into a place and he's enormously capable but just very human."

Known as one of the nicest actors in Hollywood, his costars in this new movie have nothing but praise for Cruise, especially since he was never worried about working opposite two very strong female women. "I think both of our characters are kind of frustrated when he shows up to save us," laughs Cobie Smulders, who plays a military officer. "I think Jack's very well-intentioned, but at the beginning I think it's very challenging for the three of us to work together as a team."

Danika Yarosh, who plays a teen who may be Jack's daughter, continues, "We're all used to being on our own, and being our own alphas, so we do clash about who's going to be in charge. But the situation forces us to come together and become this dysfunctional family! It was fun."

Yarosh found it particularly amazing to learn the ropes from someone like Tom Cruise. "He's such a cool guy," she says. "Just every single day on set we were goofing around, laughing, having a blast. This is my first film of this size, so I'm super new to this. And he took it upon himself to be my teacher. He taught me about who everyone was on set, camera angles and lighting and stunts and how everything works. It was really, really cool to learn from the best!"