Tom Cruise Will Be A 'Rock God' 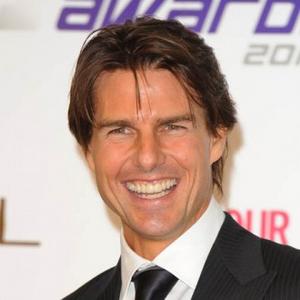 The 48-year-old actor has signed up to play ageing musician Stacee Jaxx in the big screen adaption of the hit musical, and director Adam Shankman insists Tom - who is known for his action roles - is going to impress everyone with his performance.

The 'Top Gun' star has been taking voice lessons for his role and has been studying the 80s rock songs which feature in the storyline so he gets everything right.

Adam told Access Hollywood: "I think we're going to see him every drop The Rock 'n' roll god! I'm very excited. He's so committed to doing it. He's pouring himself in this part in a way I've never had an actor do . It's pretty intense."

Tom will have to perform several songs in the film, including Styx's 'Renegade', Bon Jovi's 'Wanted Dead Or Alive' and a duet of Foreigner's 'I Want To Know What Love Is', possibly with Anne Hathaway who is set to play the character Sherrie.

The filmmaker also confirmed rumours Russell Brand is in talks to join the cast as Lonny, the manager of The Bourbon rock club, while Alec Baldwin is set to play Lonny's boss Dennis.

He added: "We are talking to Alec Baldwin and there may be some Russell Brand. I can only say at this point that there may be, because the deals aren't closed."