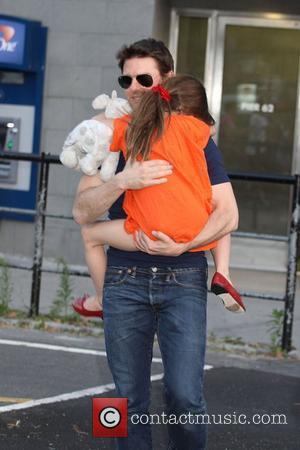 Picture: Tom Cruise and daughter Suri leaving Chelsea Piers, after spending the day together for the first time since his split from Katie Holmes. During their...

Tom Cruise is stepping up his effort to win over daughter Suri in the aftermath of his quickie divorce with Katie Holmes, something that will no doubt go on to get on the nerves Katie as he continues to spoil her rotten.

We've already seen that Suri has enjoyed a flight in a private helicopter (which is somewhat the norm for her anyway) to The Hamptons and she is also believed to have had her wardrobe restocked with a whole new line of snazzy, fashionable clothes and shoes - despite the fact that her mother has stopped her from wearing as many designer clothes.

Whether or not Tom has decided to dote on her once more and buy the puppy that sparked the now infamous photo of a teary eyed Suri in a New York pet store, is still to be seen.

Tom, who has a history of tending to each of Suri's whims, is a stark contrast of the generally sensible mothering that Katie has to offer. Recently Katie has been introducing Suri to a more normal childhood for the first time in her six years on Earth; removing her from the protective bubble that once surrounded her.

Since the split, Katie has been taking her daughter out on play dates and enrolled her in a private school (which means no more home tutoring), meaning she is interacting with other kids at last (!).