Tom Cruise and Matt Damon were spanked by the cross-dressing hostess at London's The Box at Matt's birthday party. 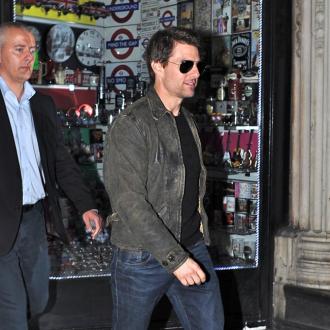 Tom Cruise was spanked by a drag queen during a night out in London.

The actor was invited to Matt Damon's 42nd birthday bash by his 'All You Need Is Love' co-star Emily Blunt whose husband John Krasinski arranged the celebrations at The Box nightclub and Tom and Matt were both cornered by the drag queen.

An insider told The Daily Star newspaper: ''Emily Blunt's husband John Krasinski organised the kinky party, and chose to have it at Simon Hammerstein's The Box club.

''He knew the birthday boy would see the funny side. Within the first couple of hours Tom and Matt were both paddled on their rears by the club's cross-dressing hostess.

''Matt got extra spanking, of course, as it was his special night.''

Other actors at the event included Chris Hemsworth and Bill Paxton and Tom enjoyed partying with his new friends.

The insider added: ''It was a celeb-packed night, with stars including Chris Hemsworth and Bill Paxton turning out for Matt.

''Tom had arrived solo, but was soon having fun with his A-list friends.

''They all had a fantastic night enjoying the naughty stage shows and partying until the end of the night.''