Tom Cruise Flies Through The Night To Reunite With Suri 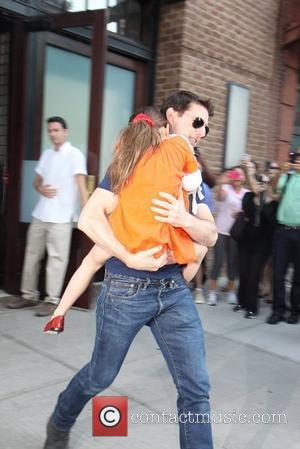 Picture: Tom Cruise and daughter Suri leaving the Greenwich Hotel, after spending the day together for the first time since his divorce from Katie Holmes, TriBeca,...

Tom Cruise reportedly took an overnight flight from California - where he had wrapped up filming his new movie 'Oblivion' - to be with his daughter Suri in New York this week. The actor landed on the East Coast early on Tuesday (July 16, 2012) for his first visit with his daughter since Katie Holmes filed for divorce.
Cruise was spotted cradling the 6-year-old tightly in his arms and rushing into the Greenwich Hotel in Tribeca, wearing jeans and aviator shades. An exhausted looking Suri clutched onto a teddy bear. They later emerged for a trip to Suri's regular 7pm gymnastics class, with Cruise simply saying "Good, good thank you" when asked by reporters how he was doing. Again, Suri kept her head tightly pressed against her father's chest and clung onto her stuffed animal. After her close encounter with the actor outside the hotel, Cruise fan Laura Becker, 25, told the New York Daily News, "I'm a huge Tom Cruise fan. He looked great. He looked like a movie star. He looked really happy and so did Suri". According to Tmz.com, the actor visited Holmes' new pad at the Chelsea Mercantile building, though did not see his ex-wife - intermediaries made the handover.
With Cruise's schedule now free, the father-daughter duo plan to spend several days together in the city.