Tom Cruise was ''amazing'' on the 'Oblivion' film set according to his co-star Olga Kurylenko. 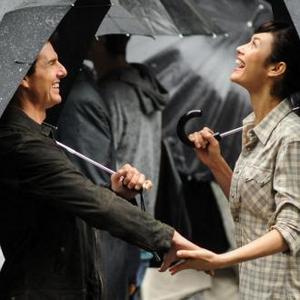 Tom Cruise was ''amazing'' on the 'Oblivion' film set.

The 50-year-old actor impressed his co-star Olga Kurylenko with his boundless energy and positive attitude while filming the upcoming sci-fi thriller together and she says he remained ''professional'' even when his wife Katie Holmes filed for divorce.

Olga had high praises for Tom and told E! News: ''I was impressed...when he comes on set, he gives you so much energy, you don't even need to drink coffee.

''He lights everyone up. He's like a sparkle. He's a very generous partner. He gives a lot.

Tom's professionalism showed when he continued to shoot scenes for 'Oblivion' in Iceland despite his pending divorce because he wanted to ''finish everything on time''.

The actor stars as Jack Harper, one of the last remaining men stationed on a futuristic Earth who must defend the planet from an alien invasion.

Ukranian beauty Olga was able to get up close and personal with 'Mission Impossible' star while playing his love interest in Joseph Kosinski's apocalyptic film.

She hinted: ''It's going to be very romantic. It's sci-fi, but there's romance.''

The actress also got to meet Tom's six-year-old daughter Suri when she visited the film set, and gushed: ''She's so sweet! She's so adorable.''

'Oblivion' is scheduled for release in April 2013.