The 52 year old actor previewed scenes from the movie at CinemaCon in Las Vegas. 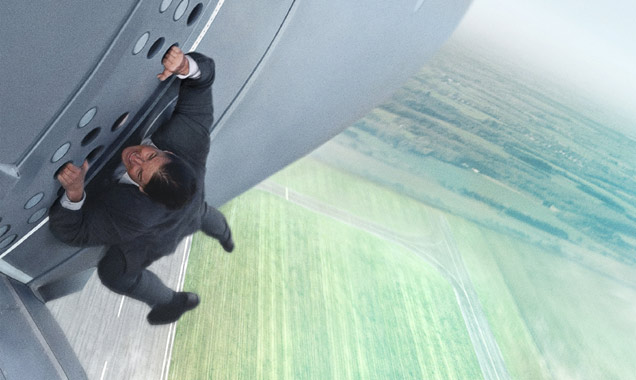 Tom Cruise is starring in his fifth Mission Impossible movie.

Speaking at the annual CinemaCon event in Las Vegas on Tuesday, Cruise said he was ‘scared shitless’ when performing a stunt in the film, which saw him hanging off the side of a plane 5,000 feet in the air.

"As always, I will do everything I can to entertain an audience and put as many people into your theatres” Cruise told the audience. The actor added that he was an ‘aerobatic pilot’ so he'd always wanted to do the scary stunt.

According to US Weekly, in order to perform the stunt Cruise wore a special pair of glasses to protect his eyes from the high-velocity winds. The actor also had to deal with low temperatures, birds, and fumes from the jet fuel while filming scene which took eight takes.

Cruise’s co-star Simon Pegg also backed up the actor’s man of action reputation, telling the audience, “All of what you're about to see, he did it, he really did it.”

Speaking about the Mission Impossible franchise Cruise said, "Here we are at number five almost 20 years later, it's really a dream come true. This movie has a tremendous amount of action of course, but also intrigue and mission twists.”

At the convention Cruise also presented two new clips from the film as well as a montage of scenes. Mission: Impossible 5-Rogue Nation hits theatres on July 31st.