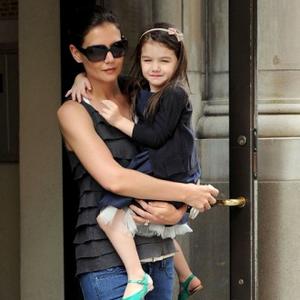 The five-year-old daughter of Tom Cruise and Katie Holmes has reportedly had several pairs of high-heeled footwear specially-made for her and already has favourite designers.

A source said: "Suri has so many designer shoes.

"She's a massive fan of Marc Jacobs and she's had several shoes custom-made, so if they didn't come with a heel, Katie had them redesigned for Suri. She commissioned a pair of Louboutins for her a while back!"

Suri is said to insist on only wearing high heels and her famous father is happy to indulge her tastes.

The insider added to Britain's Star magazine: "The older she gets, the less she wants to wear anything but little heels.

"Even when she's going to play dates or walking on the beach, she cries if Katie reaches for anything but a little pair of sandals with some sort of heel. She literally cries, 'No, Mama, no!' And then points to whatever pair she feels like wearing - no matter how inappropriate!"

"Tom loves seeing his little girl dressed up so girlie and cute. He encourages her to wear frilly dresses and tiny heels. He says Suri is growing up to be as fashionable as her mum.

"Everything's Pink. She's a young girl who knows what she wants."

However, Katie is said to be getting tired of her daughter's requests - particularly as she also insists on selecting outfits for her parents.

The source said: "It's hard keeping up with a growing girl. Suri sometimes picks out the shoes her mum should wear, and then picks out shoes for her dad.

"They genuinely seem to value her opinion and want her to make her own decisions."