Suri Cruise has been enrolled in a $40,000-a-year private school in New York. 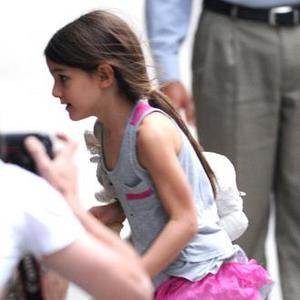 The six-year-old daughter of Tom Cruise and Katie Holmes has been enrolled in Avenues, a new educational establishment opening in New York later this year.

A source told Life & Style magazine: ''Katie has eagerly been telling Suri all about the lunchrooms, basketball courts and different activities Avenues offers. Suri's really excited about it.''

Katie and Suri have made a fresh start in the city following Katie's split from Tom and the school is just a few blocks from their apartment in Chelsea.

The building has a rooftop playground, along with a main gym that includes full-size basketball and volleyball courts.

It is part of a series of ''world schools'' and will also have branches in China, , India, Africa and Europe, along with other US cities.

Suri's dad is looking for a ''secluded'' property in 'The Big Apple' with a ''suburban presence'' so the youngster can play in private when she stays with him.

A source previously said: ''He wants something extremely secluded where Suri can play without paparazzi watching. There are lots of them in these towns.''

Although the Hollywood superstar is keeping the couple's former home in Beverly Hills - which he shares with his eldest children, Isabella, 19, and 17-year-old Connor - he is determined to have a permanent base in New York for his time with Suri.