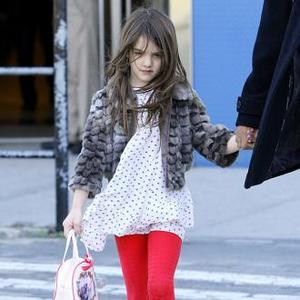 Suri Cruise has been named the world's Most Stylish Child.

The six-year-old girl - daughter of Tom Cruise and his estranged wife Katie Holmes - topped a poll by family-gifting site twistedtwee.co.uk, as organisers were impressed with her stunning wardrobe, which includes lots of dresses and mini high-heels.

Suri - whose wardrobe is rumoured to be worth $2 million - beat Beyonce Knowles and Jay-Z's baby daughter, Blue Ivy, into second place while Will and Jada Smith's girl, Willow, came third.

Twisted Twee owner Suzi Warren said: ''Aliens and pocket-sized papas haven't hindered Suri in becoming the world's most stylish sprog. She was head and tiny shoulders above all over the other celeb children in our poll.

''Although, we were alarmed by how low down Posh's wee sprog came in our poll. She's incapable of smiling at the best of times, so we dread to see the look on Victoria's face when she hears about our nationwide findings.''