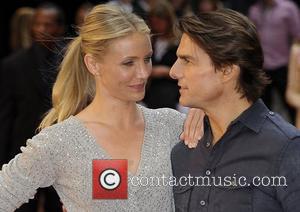 Movie stars Tom Cruise and Cameron Diaz thrilled viewers of U.K. motoring show TOP GEAR on Sunday (25Jul10) - they topped a leaderboard of celebrities in the show's racetrack challenge.
The speed-loving pair climbed behind the wheel of a tiny hatchback for a lap of the circuit for the programme's Star In A Reasonably Priced Car slot.
Diaz hit full throttle as she raced around the track, posting an impressive lap time of 1 minute 45.2 seconds - the fastest celebrity of the show's current series.
But her prestigious place at the top of the leaderboard lasted only a few moments - host Jeremy Clarkson then revealed Cruise's lap time was 1 minute 44.2 seconds, beating Diaz into second.
Cruise's hair-raising efforts saw the Top Gun star take the car up on to two wheels as he sped through the final corner of the track.
The announcement of the results brought huge cheers from the studio audience as Cruise told them, "When I was on two wheels I didn't know what was going to happen... This is the best day. This was a like a vacation."
And Clarkson was equally impressed with Cruise's daredevil antics on the track, telling him, "That was a breathtaking thing."