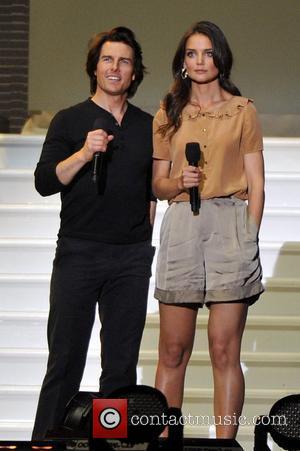 Picture: Tom Cruise and Katie Holmes during Surprise Oprah! A Farewell Spectacular at the United Center in Chicago Chicago, Illinois - 17.05.11

Tom Cruise and Nicole Kidman's son Connor is building on his entertainment portfolio - he's launching himself as a DJ.
The 16 year old followed his famous parents into Hollywood in 2008 when he made his acting debut in Seven Pounds and he recently completed work on his second film, Red Dawn.
But now Connor is focusing on a career in music and has formed his own business, CZ Entertainment, with his friend Jake Isham, 20.
Performing under the name Dj C-Squared, the teen showed off his skills on the decks at the Artists Against Drugs event in Los Angeles on Saturday (21May11) and quickly won over the crowd.
A source tells People magazine, "(He was) fun, friendly, and played all the hits. He did a great job!"