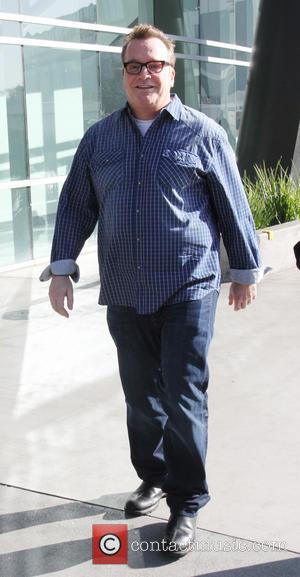 The True Lies star learned in college he would have trouble fathering a child after unsuccessfully trying to donate his sperm, but his fertility problems didn't become an issue until he tried to conceive a baby with his wife Ashley Groussman years later.

The couple went through four cycles of in vitro fertilisation to improve Groussman's chances of falling pregnant, and the actor admits they all but gave up when she miscarried twice.

Fighting back tears during an appearance on U.S. chat show Katie on Tuesday (18Jun13), he said, "If you're in the examining room with your wife and they (the doctors) tell you they don't have a heartbeat anymore, and you see your wife's face, that's just unacceptable to allow that to happen to your wife and to allow her to go through that again. So I said, 'That's it, we're adopting, it's too much.'

"We met a lawyer (about starting the process of adoption), had a great meeting, and on the way out she begged me to please try one more time. I knew it wouldn't work, I just knew, because I had all this experience, but for my wife I had to do it."

Miraculously the couple welcomed a son, Jax Copeland, in April (13) and the happy couple introduced the baby to the world on the show.

Groussman added, "It's incredible, it's a dream come true."