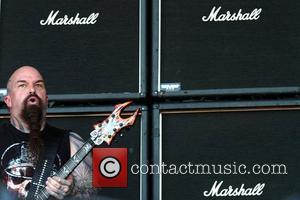 Slayer star Tom Araya is to be honoured with the key to the Chilean city where he was born.
The frontman was born in Vina del Mar, but left with his parents when he was five.
Araya will accept the key from Mayor Virginia Reginato on Friday (03Jun11) prior to Slayer's first ever concert in the city.
The rocker plans to spend the weekend showing his wife and children around the city he once called home - and spend his 50th birthday on 6 June (11) there, according to reports.