Tina Fey Locked Lips With Fellow Comedienne Amy Schumer While Presenting Her With A Trophy At The Peabody Awards In New York City On Sunday Night (31may15). 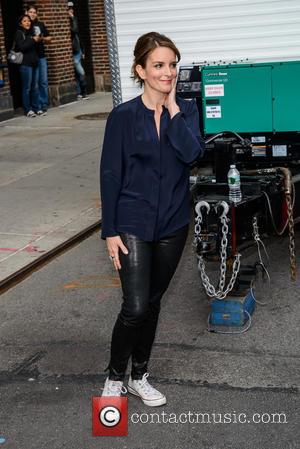 Picture: Tina Fey - A host of stars were snapped outside the Ed Sullivan Theater ahead of the last 'Late Show with David Letterman' in New...

Schumer was listed for her comedy show Inside Amy Schumer when the winners were announced in April (15), and Fey took to the stage at the Cipriani Wall Street venue in Manhattan to hand over the prize.

During her speech, Fey praised Schumer as comedy's next big female star, and joked about staging a smooch with her in the style of Madonna, who famously kissed young protegees Britney Spears and Christina Aguilera at an MTV awards show in 2003.

Fey told the audience, "Amy Schumer is killing it, as the agents like to say. Usually they are lying. But in this case it is true. Amy is killing it. She is the biggest deal in comedy right now... I really wanted to come down here tonight, and in a Madonna kind of way try to like feed off of her youth and maybe suck her soul out in a very awkward, staged lesbian kiss. But when I pitched that idea to Amy's camp, they came back with such an immediate yes that it kind of grossed me out... Instead, I think we should just give you a really prestigious award."

However, the pair locked lips anyway after Schumer took to the podium, and she later shared a picture of the pair's kiss on her Twitter.com page. Other winners at the ceremony included Maggie Gyllenhaal's drama The Honourable Woman, the small screen adaptation of Fargo, and The Americans.