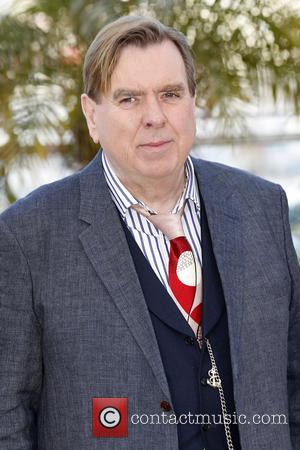 British actor Timothy Spall's expected march to a Best Actor Oscar has begun after the Harry Potter star picked up a top award at the Cannes International Film Festival on Saturday (24May14).

Spall was feted with the Best Actor prize for his acclaimed performance as artist J.M.W Turner in director Mike Leigh's Mr. Turner.

Accepting his prize, the overcome star told the Cannes audience, "I've always been the bridesmaid, it's nice to be the bride."

Meanwhile, the festival's top prize, the Palme d'Or for best film was awarded to Nuri Bilge Ceylan for Winter's Sleep.

The Turkish director has become a regular winner at Cannes; he has also picked up honours in past years for Uzak, Three Monkeys and Once Upon a Time in Anatolia, but he becomes only the second Turk to pick up the Palme d'Or.

Julianne Moore was also a big winner on Saturday evening (24May14) - she claimed the festival's Best Actress award for her role in David Cronenberg's Maps to the Stars; and Moneyball director Bennett Miller picked up the Best Director prize for his new film Foxcatcher, which is based on a real-life U.S. wrestling drama. The film is an early favourite for a Best Picture Oscar.

The Grand Prix - The Wonders