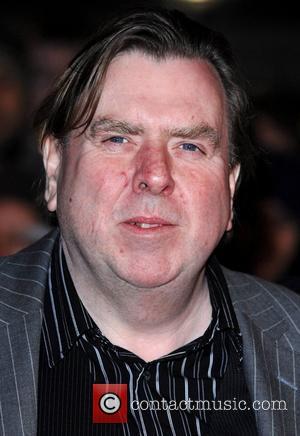 British actor Timothy Spall was urged to audition for SWEENEY TODD: THE DEMON BARBER OF FLEET STREET by his daughter - who was desperate for her father to work alongside Johnny Depp. The Harry Potter star, who appears with co-star Depp in the adaptation of Stephen Sondheim's musical production, admits he was determined to land the role of Beadle to please his offspring. He tells moviehole.net, "I really wanted this one - I knew Tim was directing and that Johnny Depp was going to be in it. My daughter, my youngest daughter, really wanted me to do it for that reason - Johnny Depp was in it. (She came on set to meet Depp) and he was really delightful to her, she had a great time. Then, I took her to the junket - and (Johnny) greeted her like an old pal when he saw her. I've got plenty of brownie points at the moment." And Spall insists Depp's treatment of his daughter was testament to his down-to-earth demeanour and 'normal' attitude. He adds: "He's (Depp's) a lovely lad actually - considering he's one of the biggest film stars at the moment, if not the biggest, he's totally down-to-earth; there's no attitude or weirdness about him. I know they can get like that - living in isolation and all. It's not like he's just some guy off the street, so it was nice to see he functions normally, but more so, he's a really nice guy and a lot of fun.