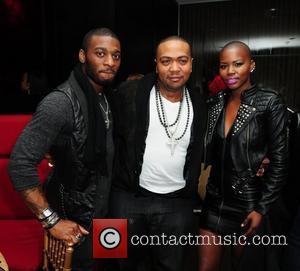 Superproducer Timbaland still suffers from "tingling" in his arm, 25 years after he was shot in an accident.
The beatmaker was working as a dishwasher at a Red Lobster restaurant in his native Virginia in 1986 when a co-worker began boasting about having a pistol. The gun accidentally went off and the bullet struck Timbaland under the arm.
He was rushed to hospital and doctors feared he would not survive.
In a new True Hollywood Story special, which aired on America's E! network on Tuesday (20Dec11), Timbaland recalls, "I was so young, never got to fulfil a lot of dreams. I just saw everything flash in front of my eyes, (I thought), 'This is it, this is how I go out.'"
Timbaland's condition began to improve and he was left temporarily paralysed in his right arm. The severed nerves in his limb gradually began to grow back, but the producer admits it was an incredibly painful period in his life.
He says, "The recovery after the gunshot took about two years. Just the pain that I went through just to restore feeling in this hand, I wouldn't wish that on my worst enemy."
Timbaland, now 39, is convinced the bullet, which is still lodged in his flesh under his armpit, is continuing to cause him health issues - but he's grateful just to be alive.
He adds, "I can't feel it but it has moved and I think it's causing me some damage, to this day. It's still tingling. If I had turned around differently (on the day of the shooting), I wouldn't be here to tell this story."