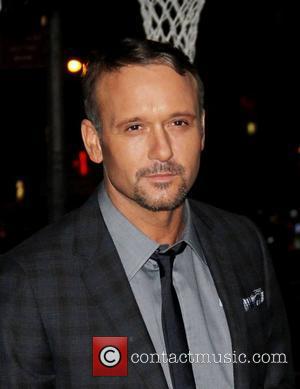 Tim Mcgraw, the American country singer who has sold in excess of 40 million records worldwide, maintained his place at the top of the Billboard country singles chart this week with his song 'Felt Good on My Lips', reports CMT.com. The 43-year-old has now held the top spot for two consecutive weeks, holding off the likes of Keith Urban and GEORGE STRAIT.
The singer, perhaps best known for his song 'It's Your Love' featuring his wife Faith Hill, released his last album entitled 'Southern Voice' back in 2009. Following MCGraw's latest chart success, the singer has confirmed he will be heading out on tour in the spring with guests Luke Bryan and The Band Perry. Dates for the 'Emotional Traffic Tour' are yet to be confirmed and MCGraw is currently on a promotional tour for his latest movie 'Country Strong' starring Gwyneth Paltrow. MCGraw first made the foray into mainstream acting back in 2006 when he starred in the movie 'Flicka', co-starring Maria Bello and he later had a role in 'Friday Night Lights'. In 2009, he appeared in 'The Blind Side' with Sandra Bullock.
Elsewhere in this week's charts, Taylor Swift's 'Speak Now' continued its run at the top of the Billboard 200, however, the record sold only 77,000 copies compared with the previous week's 276,142.