Tilda Swinton To Retire? "Acting Career Was A Major Mistake" 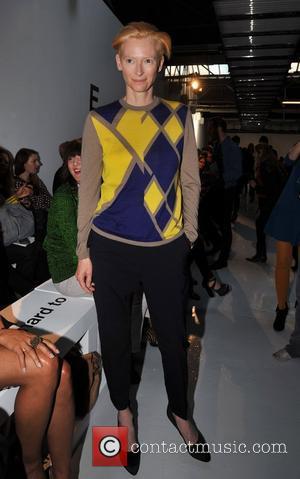 Tilda Swinton, the Oscar-winning British actress, claims her acting career was a "major mistake" and confesses she hopes to retire in the near future. The 50-year-old, currently starring in Lynne Ramsay's 'We Need to Talk About Kevin', claims to have never enjoyed performing on screen and often assumes her latest role to be her last.
Speaking to the UK's Daily Express newspaper, the actress, who scooped an Oscar for her role in 'Michael Clayton', explained, "I'm not really interested in acting. I've given up waiting for an epiphany of interest to strike. Acting is a red herring and a major mistake and I'm still trying to get back on track". Widely regarded as one of the world's finest actresses, Swinton claims to have wanted to leave the business for 20 years, saying, "Every time I'm in a film I'm determined it's the last I'm in then I'll fall into a conversation with someone and we'll cook up a new scheme. but I'm hoping to pull it to a close shortly". As for what she plans to do post-retirement, Tilda admitted she'd welcome the opportunity to have "a good sleep" and to work on her writing.
Despite the remarks, Swinton has already signed up to star in Jim Jarmusch's currently untitled 2012 drama. The actress joins an all-star ensemble of Michael Fassbender, Mia Wasikowska and JOHN HURT.