Lars Olafssen was once famous in the art world for his breath-taking paintings. However, as his life has progressed, he has lost inspiration and his art dealer Ronny has found him a teaching post at a school in the very small Canadian town of Koda Lake. It is there he meets Eddie; a quiet but mute man with mental problems who the school lets hang around on account that his aunt is their most important patron. In a bid to impress his attractive young colleague Leslie, Lars takes him under his wing and becomes his caregiver despite Leslie telling him that he suffers from a sleepwalking condition whereby he seeks out and eats small animals whilst in slumber following a traumatic childhood event. He soon discovers, however, that is isn't just small animals he's feasting on when he finds human remains near his home. Rather than feeling frightened and wanting to stay away from Eddie, he uses his cannibalism as inspiration for a new set of masterpieces but just how far will he take it?

Keep The Lights On Review 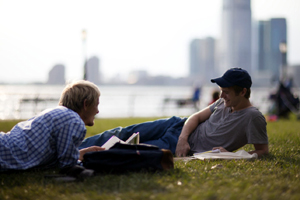 Tom Hanks returns as Robert Langdon in Angels and Demons, this film continues where The Da Vinci Code left off. Having cleared his name and solved Jacques Saunière's mysterious messages, Langdons life returns to normal.

By Christopher Null
Excellent
I wasn't expecting much from this movie. It's called -- appallingly -- Love in Thoughts (or at least that's how it's loosely translated from German), and the cover shows two young men with their shirts unbuttoned, standing in a field of golden grain.