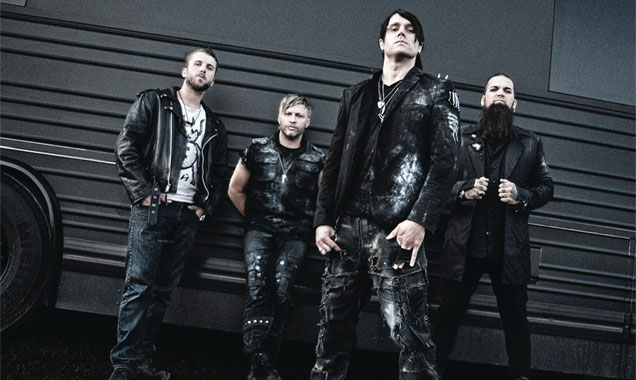 Canadian rockers Three Days Grace has announced a handful of more spring tour dates. The band has also recently released a new song entitled"Painkiller" which is available for sale now at all digital providers and currently Top 10 on the Active Rock radio chart. Click here to watch the brand new lyric video for "Painkiller".

"The song is about how everyone is addicted to something," says Sanderson. "It's written from the perspective of the vice that you're drawn to. The drug, the love - the villain who taunts you into wanting more and more."

For "Painkiller," Three Days Grace reteamed with Gavin Brown, who produced the band's platinum-selling 2003 self-titled debut album. "We went back to our roots a bit and recaptured that collaborative feeling of being in a band and bringing out the best ideas in each other," says Sanderson. "Gavin was a huge part of that in the beginning and we feel like we're back in those days where we're high-fiving each other with guitars in our hands."

The band also recently announced on their website that Matt Walst, who has been touring with the band for the past year, has joined Three Days Grace as its lead singer. "Matt has been an unofficial member for a while now," says bassist Brad Walst, who is also Matt's older brother. "We were so fortunate that he was able to step in and help us out during our tour with Shinedown and P.O.D. The fans really embraced him and it made us realize that he was the right person to be our singer. We're thrilled to announce that we truly feel like a full band again."

Matt has written with Three Days Grace in the past and is excited to be a part of the new album, which is shaping up to be a very collaborative songwriting process among the four band members. "I've always wanted to be a part of this band, ever since watching my older brother andhis friends jam in my basement when I was 12," he says. "I've always looked up to them, so I'm grateful to have this opportunity." Though Matt is now part of Three Days Grace, he is still a member of My Darkest Days and will continue to record and tour with them.

Three Days Grace - (I Hate) Everything About You (Music For Nations)