Three Blind Wolves are the sort of band who eat genre boundaries for breakfast. Although they hail from Scotland, you would barely notice it on their debut album 'Sing Hallelujah for the Old Machine' which exhibits elements of psychedelia, blues and country, while also paying homage to more American rock and indie influences like My Morning Jacket and Pavement. 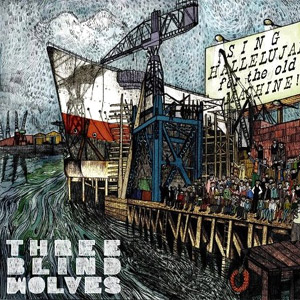 The album begins with an atmospheric wave of shoegaze-inspired guitar echoes before giving way to the melancholy blues riff of 'In Here Somewhere'. This opening song takes a couple of left turns during its six minutes; just as you think you have them pegged, Three Blind Wolves bring a new flavour to the table. 'In Here Somewhere' acts as something of an overture for what is to follow, while standing on its own as an incredibly inventive piece of music.

The next three songs demonstrate that Three Blind Wolves are a band who are not content to just sit in one particular style for too long. Although much less ambitious and meandering than the opener, 'Tall Man Riding' is a brooding rocker whose loud/quiet dynamic leads to a full on sonic attack. Recent single 'Parade' is rooted somewhere between soulful blues and the more country moments of Drive-By Truckers. 'Edgar's Church' begins almost like a Nick Drake song with quiet acoustics before exploding into cacophony. These songs, while trading on familiar motifs of the blues and the more American side of indie, keep an inventive edge at all times. It is never clear what this band will hit you with next.

Albums of Note... Tasked with the tricky mission of releasing an album that stood up to their back catalogue, after several years in the wilderness and a brief spell of time on the reunion circuit, Suede have finally released Bloodsports. Rather than opting for replicating one of their previous albums, they have amalgamated elements of all five of them.
They’ve not lost their distinctive, Bowie-obsessed sound and Suede will forever have one foot in the Britpop era but with Bloodsports they have achieved what few can manage: to come back after a lengthy hiatus, ties unsevered, water under the bridge and still get back to making a quality album and reclaiming their mark on the British landscape.“Bloodsports then, is exactly the album that Suede needed to make. It is loud, aggressive, uncompromising and absolutely, defiantly Suede. Nobody else could have written these songs. Suede have done the almost impossible task of simultaneously looking back at the past while planting a foot firmly into the future.”

Pitched somewhere between The Killers and the Kings of Leon, Cold War Kids have returned with much of the same kind of material that they showcased on their first album. Dear Miss Lonely Hearts is a little bit “Cold War Kids by numbers” and although they’re pretty adept at what they do, if they just stepped out of their comfort zone for a moment, they could surely achieve much greater heights.
“The album's sure fire highlight is Jailbirds, a jaunty rocker, with a fat bass line and a noisy breakdown reminiscent of Queens of the Stone Age. This song offers something a little different and breaks the slight monotony of the rest of the album.”

Continue reading: A Week In Music, Suede Return With A New Album To Match Their Best, Vampire Weekend Release Unusual Double A Side, Beyonce Causes A Stir With 'Bow Down'

Check out the new single from the Scottish folkies...

If you don't know who Three Blind Wolves are yet then you sure, um, might after watching this video. The little known Scots are likely to appeal to fans of Mumford & Sons, Bon Iver and all that other folkie business, and the Scots have decided to announce the launch of their new album Sing Hallelujah For The Old Machine with new single In Here Somewhere and this new video, which is also in here somewhere - directly below in fact.

So the best thing about this video is quite obviously the bloke wearing the lego head, right? Though it looks a bit battered, as though he's fetched it from the original Legoland in Denmark itself, travelling back with it on the very canoe that he's seen using here with his pal (disappointingly Legohead-less) to paddle across a beautiful Scottish lock . It's the most interesting thing about the video.

Following their recent tour supporting Frightened Rabbit, Glasgow country rockers Three Blind Wolves (although there's four of them) are here with their newest single 'In Here Somewhere' plus B-side 'Kid's Allright' taken from their upcoming debut album 'Sing Hallelujah for the Old Machine' due out May 6th 2013 on Communion Records.

They have also unveiled a rather bizarre video to go with the single featuring a man with a yellow Lego head helmet hanging out with his friend in a caf', smoking, canoeing and holding hands down a footpath in the countryside while the band play a gig at a small venue. It's quite a long track at just over 6 minutes but it is certainly not a waste of time; with its catchy melody, repetitive style and classic country undertones, it's a warmly inviting tune that will no doubt add to their growing popularity following frequent radio plays from XFM, BBC Radio 1 Scotland and BBC Radio 2 and much more media support. Any fans of Manchester Orchestra should give this a listen.

The quartet; who are vocalist Ross Clark, guitarist David Cleary, bassist Kevin Mackay and drummer Fearghas Lyon; are set for a follow-up headline tour this Spring in support of their forthcoming album, travelling around the UK in nine dates.