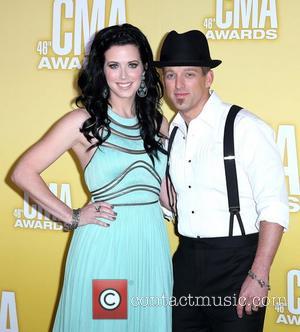 Country stars Thompson Square were shaken up on Monday (28Jan13) after their bus was involved in an early morning collision.

Shawna and Keifer Thompson were returning home from a concert in Pembroke Pines, Florida when their bus was allegedly struck by another vehicle.

The couple uploaded a picture of the damage on its Twitter.com account, alongside a post which read, "A woman just didnt (sic) see us early this morning and hit us as we crossed the highway. It was pretty foggy."

The message was deleted, but the group later tweeted, "well the bus saga continues. 5:30am someone just blindsided us. 20 minutes from home #Awesome".

No further updates were available as Wenn went to press.

The pair is currently on tour with singer Luke Bryan. The Thompsons aren't due to hit the road again until 7 February (13).