Thomas Truax - Always Been A Dreamer

New York songwriter and innovative instrumentalist Thomas Truax has released a video for his new song 'Always Been A Dreamer', which features on his new album 'Trolls, Girls and Lullabies' - the original soundtrack album for Henrik Ibsen's theatre production 'Peer Gynt'.

The video for 'Always Been A Dreamer' features Thomas performing alongside his collection of various self-designed instruments which include a drum machine made of bike wheels (which he calls 'Mother Superior'), a gramophone named 'The Hornicator' and a guitar named 'Hank'. The song kicks off with a rhythmic drum beat which quickly becomes appropriate as Thomas sings the first line: 'My heart is still beating'. In the background, we see a groom carrying his bride through a puddle before dancing with her. It's an evocative scene for a song with such uplifting lyrical content about dreams and self-belief.

Among Truax previous releases is the massively acclaimed cover album 'Songs from the films of David Lynch' which included such tracks as 'Wicked Game' from 'Wild At Hear' and 'Heaven' from 'Eraserhead'. He has previously toured with the likes of Jarvis Cocker, Duke Special and The Dresden Dolls and he is currently on tour in the UK with Chicago guitarist Bob Log III.

By Laura Johnstone in Music Reviews on 25 June 2010

If you haven't heard of Thomas Truax, you are not alone in this. To set things straight, he is an American singer songwriter embarking on his solo work. This work is to set him aside from all of the bands and stand out on his own. It certainly does that! 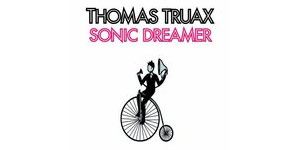