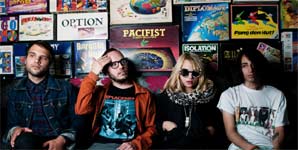 It has been 3 half years since you released your previous album, 'Thomas Tantrum'. Why did you take time to finish this new album 'Mad By Moonlight'?
It feels like 3 and a half years but it's actually only 2 and a half because the album was released at the very end of 2008! After our Japanese tour our original drummer left the band so we had to find someone new. It is hard to find the perfect member for your band so we had to audition and try out new people. After about 6 months we found Dave Wade Brown who was perfect! From there we had to write a whole album and then knock it down from 20 songs. Then we had to find a label to put the record out. All these things took so much time. It was frustrating that we couldn't get our music out there instantly but these things do just take time. C'est la vie. It's all worked out!


Please tell me your musical roots. What kind of music ware you influenced by?
The band have quite a vast range of musical tastes.
I wouldn't categorize myself as being 'into' any particular genre as such. I can be influenced all types of music. I tend to go through phases of liking particular artists and genres and then move on to the next thing when I fancy a change.
At the moment I am really enjoying Lykke Li's new album 'Wounded Rhymes' as well as Metronomy, Everything Everything, Brian Eno, Emmy Lou Harris, Blondie, Television, Beach House, Warpaint and PJ Harvey's new album.

What were the ideas behind your new album? Any concepts?
Lyrically the album was born from stress and pressure to write a whole new album. Our last tour of the first album was in Japan and when we came back home I felt pretty miserable! We had to pull ourselves up and write an album we loved from scratch. I would stay up late every night trying to create something I was proud of, this gradually led to mild insomnia and as a result the album developed a sleepy twilight, reflective theme to it.
I also felt like I couldn't justify going out or doing anything until we had written something we were proud of, so I began to turn into a bit of a hermit. This jolted my memory of books I had studied, specifically 'The Yellow Wallpaper' by Charlotte Perkins Gilman. The protagonist is convinced by her husband that she is mentally ill and must stay in her bedroom all day. I believe it was the entrapment itself that turned her mad. The theme of the album is partially drawn from insomnia, female insanity and things that go bump in the night.

Many people said that Thomas Tantrum is the one of Lily Allen's favorite bands and that they're similar to Yeah Yeah Yeahs. Did you feel the pressure when you were recording this new album?
I did feel pressure yes. It is what everyone describes as 'the difficult second album'. You feel like you have to better your first album which is very daunting.
Lily Allen was very helpful the way she championed our first album, hopefully she will like the second album as much as the first!
As for the Yeah Yeah Yeah's well I am chuffed with the comparison because they are one of my favourite bands.

How does the song writing process work in Thomas Tantrum? (How do you set up your theme of songs, record the materials and mix them down?)
We take a different approach to most of the songs, sometimes one of us will come up with an idea which we will all build on in rehearsals. Sometimes one of us will write a whole song and we'll all learn how to play it. Sometimes we just sit for hours in a room and get bored because we can't come up with anything good! Then eventually someone will get a guitar riff or a melody and we can write the whole song off the back of that. We're lucky that we have four song writers in Thomas Tantrum, not just one!

Could you tell us a little bit about each of the songs that feature on your new album ?
1. TICK TOCK (SATIE)
This song kicks off the album with the lyrics 'Tick tock, someone break that clock, don't wanna get up, I don't wanna get up' which is literal as well as metaphorical. It's a song about growing up and seeing the world for what it is and realising that you have to make something of yourself or opportunities will pass you by.

2. FACE THE MUSIC
This track came about when we were listening to a lot of The Cure and we were really digging the jangly guitar vibe. The intertwining of the guitar and bass riffs works so well and creates a dreamy vibe. The song is a fictional story about a girl who cheats on her boyfriend and runs away on a boat with a new lover. She is too much of a coward to face him and tell him that she has found someone else.

3. COLD GOLD
This track is about a young girl who is hurt in a car accident and receives a lot of compensation money but still just stays in bed because she is too scared to face the world with her disabilities. The song is me urging her to make the best of her life.

4. SLEEP
'Sleep' and 'Cold Gold' were written around the same subject matter. There is a friend of mine who won't get out of bed because she is depressed. After months of me trying I eventually have to leave her to it because she starts to bring me down. The song was born of the guilt I felt for abandoning her.

5.HOT HOT SUMMER
Hot Hot Summer is a song about a young couple who can't stop arguing. The girl is particularly feisty and tries to direct her 'fire' into, er, spicing up the relationship.

6. WE ARE THE PEOPLE
This song is about a hundred different things. I think I was feeling particularly melancholy one day and all these words came into my head in a stream of consciousness. 'I don't know which way to turn or go or when to say yes or no' pretty much sums up the theme of the song. Some days I just get scared of life and not really sure what I'm doing or where I'm going. I feel like I'm spinning.

7. ONLY HUMAN
This is a song about growing up and realising and understanding things you didn't before. I felt like I had the human race all figured out. I was looking and looking and studying everyone but when I saw the world as it really was I wanted to return to my state of childhood naivety.

8. TURNING BLUE
This song is based on a summer romance in June which didn't work out.

9. ON THE PHONE
This song is pretty straight forward, it's about wanting to get a message to someone so you relentlessly try to call them but the phone is always engaged. The girl phones and phones and becomes frustrated that she can't deliver her message.

11. ALL IN YOUR HEAD
This is another 'stream of consciousness' song whereby it's not about one thing in particular but a collection of thoughts. It's essentially about paranoia and thinking that people hate you and are talking about you behind your back. But really it's just all in your head. It's about guilt, fear and passion. It's about having to get on with things and make choices even if you aren't sure they are the right choices.

12. SUPERMODEL
This is a good old fashioned love song!

When recording and mixing the album, what was the most important thing, and what did you take care over?
I think the most important thing for us was to make a collection of songs that fitted together and that had a dreamy vibe which was kept constant throughout. With this in mind, there were songs we really liked which didn't make the album cut simply for the fact that it didn't fit in with the dream vibe.

What is the most impressive episode you experienced during the recording for this album?
The thing we enjoyed the most during recording the album! Probably the living together for a few weeks and being in a place where we are all completely on the same level and know where we want the album to go and how we want it to sound. We recorded it in a pretty cool place in Yorkshire which is surrounded by countryside. Its lovely waking up in the morning to all the nature!

Do you have any ideas for your band's future?
We've just finished a tour with Glasvegas, and then we have our own UK tour in June, then hopefully some summer festivals, then another tour in September perhaps. We just want to be able to make a living from writing and touring music. I want to write the musical score for a film and go on Jools Holland and headline some amazing festival. That's what I want to do! 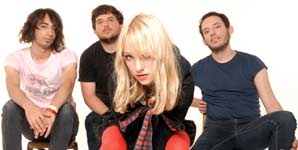