Review of Yours To Take Album by These Hearts

Every teen demographic, post-hardcore band has to hang up the hair straighteners and grow up at some point and thank God These Hearts have. 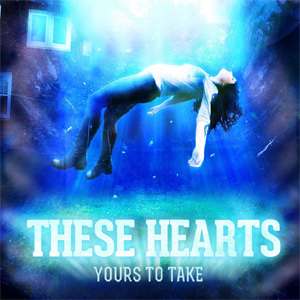 With the release of Forever Ended Yesterday in 2011, These Hearts became a misunderstood laughing stock with cringe worthy lyrics aimed at generic pop loving fans. This combined with powerful, distorted vocals similar to that of Atreyu resulted in a confusing, dissonant sound which contrasted the talent of the band's ability to perform both genres.

These Hearts new album, Yours To Take, is a much more mature, understood sound making it clear that the band have reflected upon themselves and improved. They're proving to everybody (including those that once doubted them) that they're not just a band for young teens suffering heart break.

Opening track, This Is Love featuring Chuck! No Captain Chuck! front man Bert Poncet is hardcore! Despite the worrying opening, featuring overproduced auto tune, the song soon picks up with powerful guitars and aggressive vocals, paying its respect to their fans that have supported them, screaming the words: 'We couldn't do this without you'. Elements of bubble gum pop still remain, however this maintains the band's identity and respects their earlier fans without becoming too generic.

The track Inconvenience includes a combination of vocals that Tyson Ritter from The All-American Rejects would be proud of, yet could be confused for Jens Kidman from Meshuggah later in the same song. Songs such as Birds of a Feather and Undecided Story sound similar to the likes of All Time Low and Yellowcard which contrast the post-hardcore nature of the opening tracks.

Lotr, believed to stand for Life on the road and not to be confused with Lord of the Rings, is a pop-rock hit with catchy guitar riffs containing dance elements particularly on the bouncy chorus that even the most hardcore metal fans can't refuse dancing to.

Unfortunately, it is still hard to understand the band's intentions behind the music, creating a variety of different songs, each relating to a different genre and demographic. Although this is arguably intentional, it gives them a mixed identity, making each track unsatisfyingly unpredictable. Despite this, it is a huge improvement on their previous material and shows that These Hearts are moving in the right direction.