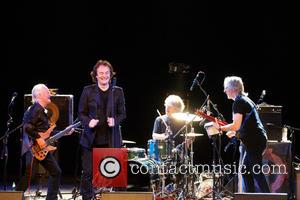 Picture: Colin Blunstone, Jim Rodford, Steve Rodford and Tom Toomey - The Zombies perform live in concert at The Tivoli Theatre before embarking on a huge...

Classic rockers The Yardbirds, The Animals and The Zombies are to tour Britain together this year (14).

The three 60s supergroups will hit the road in Aylesbury, England on 23 January (14) for the trek, which will end in Leicester on 7 March (14), according to a post on The Yardbirds website.

The Ultimate Rhythm and Blues Tour will also feature the Spencer Davis Group and singers Chris Farlowe and Maggie Bell.

The dates will serve as new The Yardbirds recruit Top Topham's first full tour since replacing original guitarist Chris Dreja in the line-up last summer (13). Dreja was forced to quit the group due to health reasons.