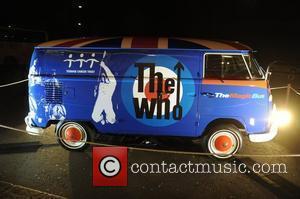 Picture: The Who's iconic Volkswagen 'Magic Bus' on display at the Royal Albert Hall Roger Daltrey, The WhoÕs lead singer, said: 'This van is one of...

The Who rocker Pete Townshend was left red-faced when he mistakenly included Doris Day in a song about dead celebrities. The reclusive actress/singer is alive and well aged 82, but it is too late for Townshend to change new song MIRROR DOOR, which has already been pressed on copies of The Who's first studio album since 1984. He says, "I was absolutely convinced she was dead but then I went to the internet and there she was, with a happening website." The song's lyrics feature dead stars including Day, Elvis Presley and Buddy Holly, discussing their careers.