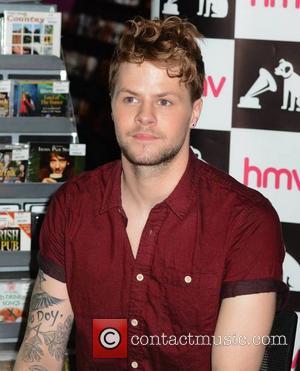 The Wanted star Jay McGuiness was left bloodied and bruised after he became embroiled in a brawl at a nightclub in Britain over the weekend (08-09Mar14).

The singer allegedly became caught up in a dispute at a venue in Essex, England in the early hours of Sunday morning (09Mar14).

Photographs show MCGuiness on the floor with a bouncer grabbing his arms, while others show him with blood pouring from his mouth.

A source tells Britain's The Sun newspaper, "Everyone was standing around the front door and there was a kerfuffle (scuffle) in the foyer. Jay then got dragged out by the bouncers. He was shouting and screaming and they were trying to pull him back. He was putting up a struggle. They ushered him into a corner to get him to calm down but he wouldn't."

MCGuiness was at the nightclub with his bandmate Tom Parker, who was pictured with blood on his shirt.

A spokesman for MCGuiness says, "There was an altercation in the club that Jay found himself in the middle of. He ended up with some minor cuts and bruises."