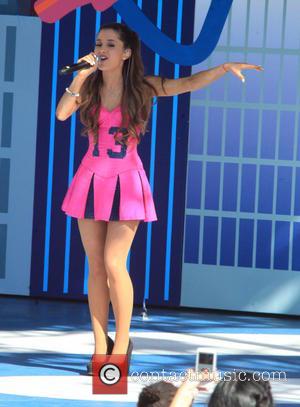 The Wanted star Nathan Sykes' romance with Ariana Grande is getting very serious very quickly - he took the pop star and actress back home to Gloucester, England to meet his parents at the weekend (06Oct13).

The boy band star admits he was nervous about the family get together but his folks fell in love with the former Victorious star, who confirmed reports she was dating Sykes last month (Sep13).

He explains, "I took her back to Gloucester... to meet all my family. I was so scared, you don't even realise. But my family thinks she's amazing and they're like, 'Nathan, how?' and I'm like, 'I don't know'. I don't think anyone can ever punch above their weight, but I feel very lucky, put it that way."

And he admits his bandmates are also big fans of his girlfriend, telling blogger Perez Hilton, "They love her. They feel really protective over her. They've taken her under their wing. I'm always like, 'Don't lead her astray, boys'. They adore her.

"She's the easiest person to get on with... She's amazing, I'm so happy... She's a really special girl. I think the world of her and I hope we'll be together for a very long time."