The series will be waving goodbye to one of its original characters.

'The Walking Dead' will be going through one of the biggest shifts in the shows history, it's been revealed, as a major character was revealed to have been bitten by a zombie, which will surely bring their time on the show to a screeching halt in the very near future. 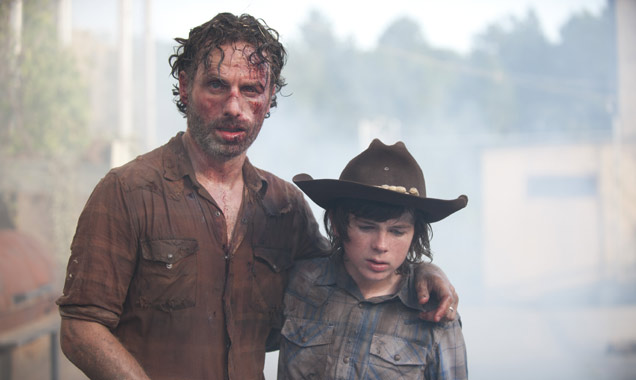 Rick and Carl in the fourth season of 'The Walking Dead'

Distracting The Saviors so that his fellow survivors in Alexandria could escape an attack, Carl Grimes (Chandler Riggs) let his guard down for a split second, leading to him being the victim of a zombie bite after months of battling them and becoming a fully-fledged hero in the undead apocalypse.

It seems as if no strings will be pulled to keep Carl on the show, as 'Walking Dead' showrunner Scott Gimple confirmed on companion show 'Talking Dead' that the character would indeed die because of the bite, rising as a walker himself if he isn't killed off by one of his own before doing so. There's not even hope of an amputation saving his life, as he wasn't bitten on a limb that can be removed.

Seeing the effects of Lori's death early on in 'The Walking Dead' should provide just a hint of what we can expect from his reaction when he loses his only son to the undead hordes, and with the survival of all those he holds close at the centre of the war he's fronting, going up against Negan (Jeffrey Dean Morgan) and his forces, an unhinged and mentally unstable Rick isn't going to be good enough to get the job done.

Killing off Carl in the show is yet another huge twist not only for fans of the show, but those who keep up with the comic books on which the series is based. Carl is still an integral character on the pages of the comics, so this wasn't something that ANYBODY saw coming. Fortunately for viewers, he's not quite as much of a beloved character as the likes of Daryl or Maggie.

The next few episodes of 'The Walking Dead' are going to be some of the most compelling in the show's history, and we can't wait to see how it all plays out.