By Shaun Kelly in Music Reviews on 21 February 2013

The Virginmarys might be young but the band has already been around a while. Formed in 2006, the Macclesfield three piece led by singer and guitarist Ally Rickaty has had numerous years of touring to hone their craft and bagging a few plum support slots. 'King of Conflict' is the band's debut. In some corners of the music industry the band is being described as the saviours of British Rock music. 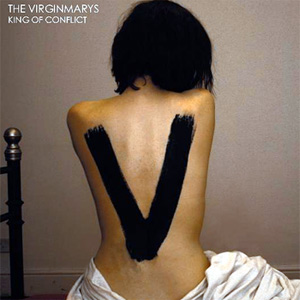 However, let's get one thing straight. The Virgin Marys are not the saviours of British Rock music, and never will be. As harsh as that may sound it is not an insult, the problem is that King of Conflict embraces a rock sound that is too much of a throwback to the past. In a music industry that's hard enough for rock music to make an impact that could be a problem.

King of Conflict kicks off with recent single, 'Dead man's shoes', a steady if not intriguing opening guitar riff. Rickaty has just enough rasp in his voice to save himself from being labelled as another random who can hold a rhythm and blues tune. Although the sound of the album may not be particularly unique, the musicianship of the trio is never in question. Rickaty sure knows how to ring a riff out of his guitar and the rhythm sections of bassist Danny Dolan and drummer Matt Rose are solid. A band containing the talents of such people should be able and willing to produce more than an album that feels like the usual rock and blues numbers.