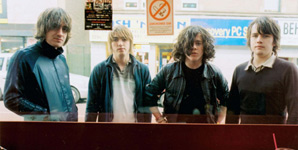 Read our interview with The View.

It's Friday night and the pubs are heaving. Contact are currently sat in one of them with guitarist Kieren Webster and bassist Pete Reilly from The View. Drummer Steven Morrison is playing the fruit machine by the bar with other members of their entourage and tour support The Law. Frontman Kyle Falconer however - who were promised an audience with initially - is nowhere to be seen. The reasons why become oh so apparent an hour or so later.

This evening they're headlining the 200-capacity Bodega Social in Nottingham, which is a marked difference from their last appearance here at Rock City, a venue that holds 1500 more. The band aren't exactly enamoured with their less than glamorous settings either, as we discover over the next thirty minutes.

Let's start with the venues you're playing on this tour. They're somewhat more intimate to say the least than your last trip around the UK.
Pete: Well this is definitely the worst venue we've played in so far, that's for sure. We decided we wanted to come back and do a wee rock and roll tour for the proper fans, sort of like a way of saying thanks for their support as well as giving us an opportunity to road test the new material.
Kieren: Aye, we wanted to do Nottingham Rescue Rooms but our management told us we had to do the Bodega instead..
Pete:.which as well as having a tiny stage, has also created problems for a lot of genuine fans getting tickets as it was sold out almost immediately.

It does seem a bizarre choice of venue bearing in mind your current status.
Kieren: It works sometimes when we play venues like this. I mean, Manchester last night for example, where the venue held about 800 and the sound system was perfect.
Pete: Manchester was always going to be legendary though after Mani came along and introduced himself to us!
Kieren: The thing with the Bodega is that the stage is just too small, and we've got a lot of equipment that we're not going to be able to use this evening.

Does it feel kind of weird though - almost like starting from scratch all over again - playing these smaller venues after the year you've just had?
Kieren: I like the idea of playing in a smaller venue where you can see people's faces and there's a sweaty atmosphere. I mean, that's where it all began for us and is where we got noticed in the first place, but we've grown as a band, as songwriters, and we're just more accustomed to playing on bigger stages.

What kind of reception have you been getting from your fans so far on this tour?
Kieren: High expectations, definitely. I think when we first started it was easier in some ways because people didn't know what to expect, but now we're seen as an established band they almost demand us to be on fire all the time.

Do you see The View as more of a live band than anything else?
Kieren: I think I prefer playing live to the whole recording process, definitely.
Pete: I just love everything about being in a band. There are a lot worse things any one of us could be doing then being in a fairly successful rock and roll band so we should be grateful for what we're doing and everything that goes with it.

What would you be doing if you weren't in a band?
Pete: I'd be a roadie, something, anything to do with music I guess.

Who for?
Pete: The Rolling Stones.

There seems to be a resurgence of new Scottish bands coming through at the moment, particularly from Glasgow. Do you see them as competition or is there a kinship between you all?
Pete: No we definitely don't see any of them as competition. If anything there's a sense of pride because it shows Scotland is booming again.
Kieren: I think there is a feeling that we should support our own in terms of the whole Scottish thing but at the same time we don't really feel a kinship with any of them. We sort of get on with most of the bands from the East Coast where we're from - The Law being a prime example - but we're not really that aware of everything that's going on in other parts of the country if I'm being honest.

Why do you think the music industry is currently focused on Scotland as opposed to, say, London or Manchester as in the past?
Kieren: I don't really think they are. I mean, who have you got that's really made it? There's us to an extent, The Fratellis, Glasvegas.I really rate what they're doing actually.but apart from that it's difficult to see many others that may have a similar impact.
Pete: I just think it's that whole northern thing that started with the Arctic Monkeys. They're just going as far north as they can now I guess.!

Your new single '5 Rebeccas' has had several positive reviews in the music press. Were you worried that they may turn against you?
Pete: You're always worried about stuff like that but it doesn't affect the way we write songs.
Kieren: I think they've come to realise that we are who we are, an energetic guitar band. I was more concerned that people might have forgotten about us. I mean, if a band who I liked disappeared for the best part of a year I'd probably have moved onto something else by now, so there was always that worry at the back of my mind that other people may think the same way.
Pete: The one thing we don't want people to think is that we've come back with more of the same that was on the first album only with less quality.

That's always a worry though in that both the media and the industry seem to create 'flash in the pan' bands and scenes only to discard them once the hysteria has died down.
Kieren: I think our second album ('Which Bitch', out early 2009) is better than our first album without a shadow of doubt.
Pete: The songs are better, the arrangements are better, even silly little things like the fact we are better at playing our instruments.
Kieren: I think we are tighter as a band and much more creative as well.

Do you feel that there is more pressure on you now though to deliver and ultimately sell your second album after the success of 'Hats Off To The Buskers'?
Kieren: No not really. The band has complete control over the record, not the label. I mean, its their job to promote it and sell it but if we weren't happy with the results ourselves then we wouldn't even let them anywhere near it. I mean, when all's said and done, we're the biggest selling act on our label (1965), so for them to put pressure on us would be unfair I think.

What musical influences - apart from being more technically proficient as a band - have helped create 'Which Bitch'?
Kieren: We've been listening to a lot of Clash stuff, and there's a bit of Fleetwood Mac in places too.
Pete: We take a lot of inspiration from different walks of life as well. It doesn't necessarily have to be just music. It's like sometimes you can watch a film and it just takes over your attention span to the point where you can't stop thinking, and then eventually writing about it.
Kieren: I think this record will surprise a lot of people. I'd say its quite challenging in places.

Take me through the songwriting process.
Pete: Usually it just starts on acoustic guitars, then Kyle (Falconer) and Kieren tend to come up with the lyrics together. They'll then bring them back to the band and occasionally me and Steve (Morrison) will add a rhythm section that might change its whole direction.
Kieren: More often than not though the original riff that me and Kyle jam will form the basis of the song and then everything just stems from there. Lyrically I guess a lot of the themes come from personal experiences, people we know.just that kind of thing. For example, 'The Don' is about a real person. He was chuffed to bits when he first heard it.
Pete: He ended up being in the video!
Kieren: '5 Rebeccas' on the other hand is probably the most personal song Kyle's ever written. It's about the five women he most admires.
Pete: None are called Rebecca though!

Do you set out to specifically write radio friendly pop songs?
Kieren: No, definitely not. There's a few songs on 'Which Bitch' that will surprise a few people, definitely.
Pete: '5 Rebeccas' was picked as a single because it is the most radio friendly of the new material, but there are several songs on there that we'll probably never be able to recreate live, or not as a four-piece anyway.
Kieren: We've got one song that sounds like The Beatles' 'A Day In The Life'. All key and structural changes when you least expect them as well as an orchestra.. The next single, 'Shock, Horror' is different again. It's got this big Faces riff and loads of keys on it.

There's been a lot of focus heaped on The View's aftershow activities, shall we say? Would you say that the main reason you're doing this is for the music or the lifestyle?
Kieren: Obviously we're here because of the music.
Pete: I'd say both, because without one we wouldn't be able to enjoy the other.

And then came the show.or at least that's what should have happened. Unfortunately, singer/guitarist Kyle Falconer was in no fit state to stand up let alone play, and three songs in he left the stage to bemused looks from his fellow bandmates and the audience. The agitation of the crowd, now at boiling point, was only quelled by the promoter announcing that all ticket holders would receive a refund, and at one point, Falconer even attempted to return, ironically for a cover of his hero Pete Doherty's 'Music When The Lights Go Out', which he just about managed to finish before clambering off again. Despite the gallant efforts of his three colleagues to continue and finish the show, tonight will be remembered as being eventful, but sadly for all the wrong reasons.