British Rocker Kyle Falconer Is Reportedly Facing Allegations Of Assault Following An Arrest Outside A Casino In Dundee, Scotland. 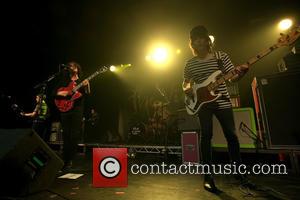 Local police officials reveal they were called to investigate a disturbance in the early hours of Sunday (04Oct15), when a 28-year-old man was taken into custody.

Sources tell local newspaper The Scotsman the suspect is The View frontman Falconer, who is a native of the city.

An eyewitness says, "I had come out of the casino after someone I was with did not get in because they had forgotten their card (sic). I first noticed a man standing speaking to police officers. I went across to the garage (gas station) and when I came out there was an argument going on. There was a lot of shouting.

"The police that had been outside the casino came across and intervened. Another police car turned up and two officers got out. They were speaking to two men and then they arrested one of them and told the other to go home."

Representatives for The View and Falconer have yet to comment on the news.

The band recently wrapped up a tour of the U.K., bowing out with the second of two concerts in Edinburgh, Scotland on Monday (05Oct15).